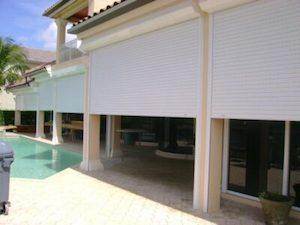 Are you looking for hurricane shutters in Sarasota Florida to protect your home or business from hurricanes, tropical storms and other severe weather? If so, turn to the pros at Eurex Shutters to get your home or business hurricane ready. We offer the highest quality installation, repair and maintenance of storm shutters for residential and commercial properties. You will get quality products, amazing service and affordable prices. Our locally owned and operated business has been protecting customers in Sarasota Florida and the surrounding areas from hurricanes, storms, and intruders for over 35 years.

Click below to call us or fill in our form for your no charge estimate.

Florida hurricanes and tropical storms can be brutal. But our PTX™ hurricane shutters are even tougher! All of our custom storm shutters are designed to meet and exceed the latest Florida Building Code. In other words, they are engineered to offer the best protection you can buy.

So rest assured. Your home, family, and business will be safe and protected.

All of our products are made locally and installed by our own, local technicians.

So whether you need window shutters, or shutters to protect your doors or screened in lanai we have you covered.

Some of our many types of hurricane shutters include:

Don’t buy your shutters at a big box store. All Eurex Shutters PTX™ storm shutters are custom designed and built locally. We measure and custom build your shutters specifically to fit your home.

Your order includes the custom design, manufacture and installation of your hurricane shutters by the Eurex Shutters team.

Even better, our shutters are installed by our own factory trained professionals. We don’t sub out our work to subpar installers like some other companies do.

Why Choose Eurex Shutters For Your Hurricane Shutters Sarasota Florida?

You will get custom, quality and affordable hurricane shutters installed and serviced by our local, family-owned business.

Our company is owned by the Tessner family. They have been providing custom designed and built hurricane shutters to SWFL for 35+ years. We are a locally-owned and operated family business.

Tommy and Hans are the ones that come out to meet you at your home. They will measure your property and provide you with a free, no-obligation estimate.

So trust our family to protect your home, family and place of business.

Here’s just a few reasons why we have 25,000+ satisfied customers in the Sarasota area. We offer:

“WHAT A INSTALLATION JOB THE TECHNICIANS DID, HANS AND THE TEAM NEVER GAVE UP AND SHRIVED TO SATISFY MY INSTALLATION AND APPEARANCE IDEAS. I HAVE BEEN IN BUSINESS FOR 50 PLUS YEARS AND NOT EASY TO BE IMPRESSED BY A COMPANY AND THEIR SERVICES…THANK YOU HANS AND TOMMY FOR BUILDING A PROFESSIONAL TEAM.” – Fiorno Palermo, SWFL

How much do rolling hurricane shutters cost?

You should expect to pay around $25 – $29/SQFT for rolling hurricane shutters. These are a premium type of storm shutter due to their added functionality and multi-use as security shutters. The price you pay for your rolling shutters will depend on the features you select and the materials and labor cost. Check out our hurricane shutter cost guide for pricing on all different types of shutters.

What are the best hurricane shutters?

Are hurricane shutters worth the cost?

Yes. If you live in the Sarasota FL area then some form of hurricane shutters or storm protection is absolutely worth the cost. Most importantly, storm shutters will protect your home, family and place of business. They may also save you money on your homeowner’s insurance policy and increase your home’s value to buyers. See 8 powerful benefits of hurricane shutters for more reasons why they are worth the cost.

Our showroom is located about an hour and 20 minutes from downtown Sarasota, via FL-75 (click for directions in a new page or see directions below). But if you don’t want to drive we will come to your home.

We are proud to say that we have served the Sarasota and the surrounding areas since 1986. In that time we have had the pleasure of meeting and working with many homeowners and business owners in the area.

You can learn a little bit more about the city and some of its amazing attractions below.

Sarasota FL is located in Lee County, Florida. Nearby cities include Venice, Nokomis, and Osprey.

Attractions and Places of Interest

Some of the many attractions and places to visit in the city include:

Directions from Sarasota to our showroom:

Hurricane Shutters in Sarasota FL and the Surrounding Areas

We have provided the highest quality hurricane protection products to Sarasota, FL since 1986. Below are some of the many neighborhoods of Sarasota that we serve:

Image by Tracy Jones from Pixabay